Symposium on Systems Thinking and Design 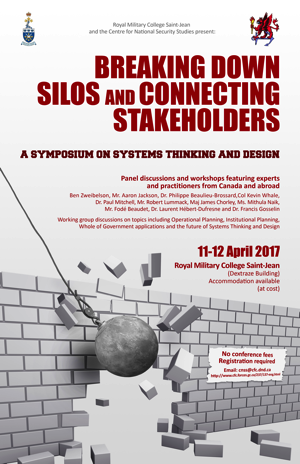 The Royal Military College Saint-Jean (RMC Saint-Jean) and the Centre for National Security Studies presented “Breaking Down Silos and Connecting Stakeholders: A Symposium on Systems Thinking and Design”. Held on 11 and 12 April 2017, the Symposium brought together over 100 experts and practitioners from Canada and around the world. Through panel discussions and workshops, participants and speakers gathered to discuss and debate key topics related to design and systems thinking.

Following the keynote address by Ben Zweibelson, panel discussions focused on the status and evolution of design and systems thinking throughout the world, and approaches and evolution within the Canadian Armed Forces, as well as applications and the future outside of the military sphere. Although they had already experienced a very full day, the panelists established an environment in which participants engaged in discussion.

The momentum of the first day was continued on day two through a speech by the Commandant of RMC Saint-Jean, Colonel Simon Bernard, who introduced the day focused on small-group discussions on subjects such as design and systems thinking applications and their impact on operational and institutional planning, education and training, the whole-of-government approach and its future. Following presentation of key findings from these workshops, Ben Zweibelson closed the Symposium with much to think about, with his presentation based on a recent article that was published in the Small Wars Journal.

Below you will find the presentations from keynote speeches and panel discussions, links to sites, groups and articles that were discussed throughout the symposium, and some pictures of the event itself. Over the coming weeks, this material will be supplemented with a summary of proceedings in both written and video formats. Please note that opinions expressed remain those of the author and do not represent Department of National Defence or Canadian Armed Forces policy. This material may not be used without written permission.

If you have any questions or comments related to the symposium or future events, please send an email to CNSS@cfc.dnd.ca.